Columbus, Ohio, USA, July 23, 2015 – Fabrisonic LLC, a manufacturer of Ultrasonic Additive Manufacturing machines and 3D metal printing announced that it has received a Boeing 2014 Performance Excellence Award. The Boeing Company issues the annual awards to suppliers who have achieved superior performance and provided outstanding service. Fabrisonic maintained a “Silver Composite Performance Rating” for each month of the 12-month achievement period, from October 1, 2013 – September 30, 2014. This is Fabrisonic’s second award, having received a Boeing Performance Excellence Award in 2013.

This year, Boeing recognized 548 suppliers who achieved either a Gold or Silver level Boeing Performance Excellence Award. Fabrisonic is one of only 429 suppliers to receive the Silver level of recognition. “Fabrisonic, now in its 4th year, continues to grow with a keen focus on innovation in 3D metal printing,” comments Mark Norfolk, president of Fabrisonic. “Our technology continues to be recognized throughout the world and this award is a testament to our dedication and hard work.” 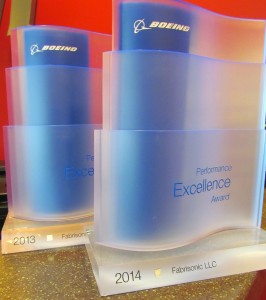