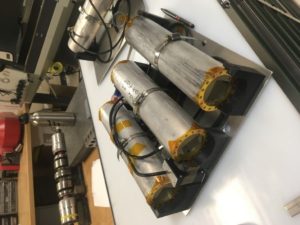 The solid-state nature of Fabrisonic’s Ultrasonic Additive Manufacturing (UAM) bond allows for encapsulation of all manner of wires, fibers, and sensors into a metallic substrate.  Over the years, Fabrisonic has embedded strain gauges, microphones, thermocouples, and even ultrasonic inspection sensors into solid metal parts.   By burying a sensor into solid metal the sensor is:

Recently Fabrisonic partnered with Luna Innovations, a manufacturer of medical, telecommunications, energy and defense technologies, to solve a problem fit for a rocket scientist (disclaimer – we are not asserting that we are rocket scientist, we are not that cool).   NASA contracted the team to gather data in cryogenic fuel pipes for rocket test stands at NASA Stennis Space Center.   NASA’s goal is to get data on pressure and temperature gradients inside of their fuel piping closer to the test article to better understand how a particular engine is behaving.  Historically, NASA has mounted sensors to the outside of the pipe using elbows and ports, which communicates some data.   However, it does not give the same fidelity as a sensor located adjacent to the fuel stream and can disrupt the fuel stream.  Similarly, NASA has mounted sensors directly into the flow path using pass-throughs in the existing pipe.   These ports and pass-throughs can influence the fuel flow, adding uncertainty to the measurements.

The Fabrisonic team assigned to this project 3D printed sensors directly into the wall of the pipe.   This allows a suite of sensors to be embedded in essentially the same space, giving a much clearer picture of thermal and pressure gradients in the piping since no ports are required.   All of the sensors used were fiber optic based sensors, provided by partner Luna Innovations.   The team selected fiber optic sensors as they are small and thus don’t create a large impact on the structure of the pipe.   The fiber-based sensors can also collect data over the entire length of the fiber allowing for a continuous length of sensing instead of a fixed point.

As with many projects, Fabrisonic chose to only print a portion of the pipe.   3D printing is expensive so the team worked to minimize the amount of 3D printing (somewhat counter-intuitive, but I bet the rocket scientist already knows this trick.)   The team started with an existing pipe.   A flat section was milled into the outer diameter (OD) of the pipe creating a landing strip for embedding.   A small groove was cut to positively locate each fiber.   Once the fibers were inserted by hand, Fabrisonic printed additional material over the landing strip to build the OD back up to spec.   After printing, excess material from the printing was removed using standard CNC milling.

The team has tested the pipe at various pressures and temperatures to calibrate the sensor.  This included boiling the pipe in water and filling it with liquid nitrogen to emulate cryogenic fuel.   The pipe continued to provide solid data throughout all of the extreme conditions.   The next phase of the project will be to print a larger pipe section for use at NASA Stennis Space Center.